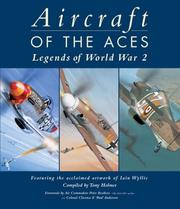 Aircraft of the Aces Legends World War 2 by

Osprey's Aircraft of the Aces series combines full colour artwork, the best archival contemporary photography, and first hand accounts from aces to /5(16). Many other famous aces were exclusively ‘Yak patriots’, including the French Normandie pilots. This book focuses on the Soviet aces who scored all, or most of their victories in the Yak, drawing informaion from official unit histories and memoirs of the Soviet pilots themselves. This book depicts the fascinating life of an aircraft that fought on both sides in the war, including the oft-overlooked Vichy French Air Force, with color artwork and photographs illustrating just how many national P variants there were. Aircraft of the Aces Each book focuses on the fighter pilots who became aces flying a particular aircraft in a particular war or theatre of war, with first hand accounts from the aces themselves. Aircraft profiles, unit listings and scale plans support the text.